HCM City (VNA) – Vietnam secured a 1-0 win over defending champions Malaysia in their first match in Group B of the ASEAN Football Federation (AFF) U18 Championship which took place at Thong Nhat Stadium in Ho Chi Minh City on August 7. 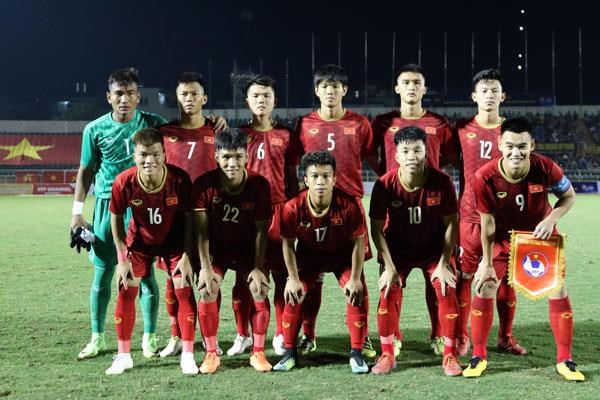 Starting lineup of Vietnam’s U18 team in the match against Malaysia on August 7 (Photo: vff.org.vn)
The game was a tight affair for most of the 90 official minutes.

In the 88th minute, a corner kick by Vietnam’s last substitute Vo Minh Trong caused a disorder in Malaysia’s defence and a Malaysian player shot the ball into their own net.

Vietnam are in Group B which is considered the “group of death”, including Australia and Thailand – two of the strongest sides in the tournament – as well as Cambodia, Singapore and Malaysia.

Vietnam will play Australia on August 9, Thailand on August 13 and Cambodia two days later. All the matches will be held at Thong Nhat Stadium in HCM City except for the match between Vietnam and Singapore, which will be played at Go Dau Stadium in neighbouring Binh Duong province.

Meanwhile, Group A comprises of Indonesia, the Philippines, Laos, Myanmar and Timor Leste, and Brunei.

All the three matches of Group A will be held at the Go Dau Stadium in Binh Duong province.-VNA