Da Nang (VNA) – Vietnam’s U21 team trounced Hanyang University of the Republic of Korea 4-1 in the first match of the International U21 Football Championship 2019 at Hoa Xuan Stadium in the central city of Da Nang on October 30. 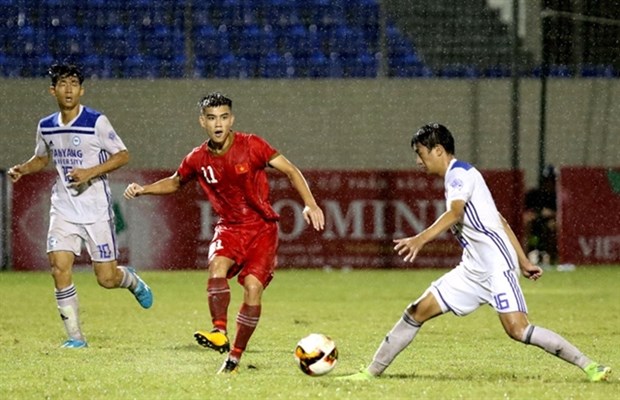 Vietnamese U21s vs Hanyang University of the Republic of Korea at the International U21 Football Championship 2019 on October 30 (Photo: laodong.vn)

Heavy rain made it difficult for both teams to show their skills, and the first half finished goalless.

After the break, Tran Van Cong headed the ball into the net from a corner kick to give Vietnam the lead in the 53th minute.

The Korean side bounced backs strongly and levelled the score in the 65th minute.

However, Tran Van Buu, Vu Tin and Ho Minh Di were all on hand to put a glossy finish on the result for Vietnam.

In another match, the team of Japanese students defeated FK Sarajevo U19s of Bosnia and Herzegovina 4-0.

Vietnam will next take on FK Sarajevo U19s on November 1.

The four teams will compete in a round-robin format to select the two best teams for the final; the two remaining teams will play-off for third place. The champions will pocket the trophy, medal and 12,000 USD in cash.

The event will serve as an excellent chance for Vietnam’s U21 squad to gain experience ahead of important upcoming tournaments.

The players will also have the opportunity to impress ahead of selection for the U22 team that will take part in the 30th SEA Games in the Philippines next month./.