Park Hang-seo to coach Vietnam until 2022

Hanoi (VNA) – Park Hang-seo has extended his contract to coach Vietnam’s national and U23 football teams until 2022. 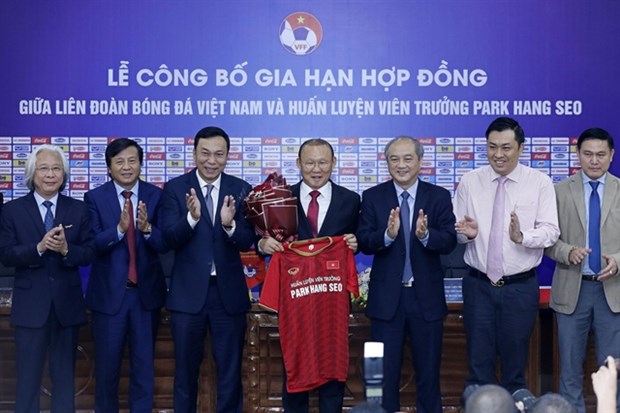 Park Hang-seo (third from right) and officials of the Vietnam Football Federation at the contract signing ceremony. (Photo courtesy of VFF)

The three-year contract between the Vietnam Football Federation (VFF) and the Korean coach was signed in Hanoi on November 7.

Park’s salary was not revealed but has been reported at about 50,000 USD per month, which would make him the highest-paid coach in the nation’s history.

“I am proud to be coach of Vietnam,” said Park at the signing ceremony.

“I love Vietnamese football and I love my players. It is my sincere love. At this moment, I feel more heavy responsibility but I promise to try harder to reach more success and meet people’s expectations,” he said through an interpreter.

Park, 60, will take charge of both the national team and the U23 squad in his next reign. He is expected to help Vietnam win SEA Games gold for the first time later this year in the Philippines.

In the coming years, the Korean coach hopes to keep Vietnam on top of the region and record good results in continental competitions.

In two years in Vietnam, Park has led the national team to win the AFF Cup 2018, finishing fourth at the Asian Games and reached the quarter-finals of the AFC Cup, while the U23 side came second in the AFC U23 Championship.

Currently, Vietnam are undefeated in the 2022 World Cup qualifiers with two wins and one draw./.