Hanoi (VNA) – The Vietnamese sporting delegation on November 26 left Hanoi for the 30th Southeast Asian (SEA) Games in the Philippines on a charter flight of the national flag carrier Vietnam Airlines. 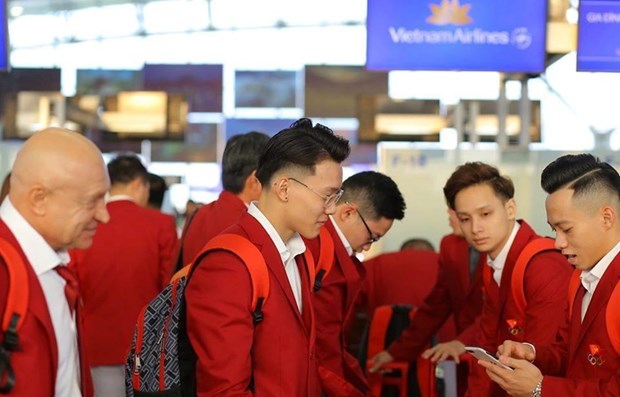 As scheduled, all members of the delegation will join a number of important activities of the event, including the flag-raising ceremony on November 29 in Clark city, and the opening ceremony in Manila on November 30.

On November 25 afternoon, the men’s football team of Vietnam secured a perfect start at SEA Games 30 with an emphatic 6 – 0 victory against Brunei at Binan stadium.

Meanwhile, the Vietnamese women’s team kicked off their Southeast Asian Games title defence with a 1-1 draw with rivals Thailand on November 26 afternoon.

Apart from football, Vietnamese athletes will begin to compete in other sports from December 1.

Vietnam set the goal to bring home at least 65 gold medals, with an emphasis on Olympic sports such as track and field, swimming, artistic gymnastics, fencing and wrestling.

SEA Games 30 will officially kick off on November 30 and wrap up on December 12, with the participation of athletes from 11 Southeast Asian nations. About 8,750 athletes will compete in 56 sports./.