Hanoi (VNA) – Vietnam’s U22s advanced to the semifinals of the 30th SEA Games men’s football after making a remarkable comeback draw against Thailand on December 5. 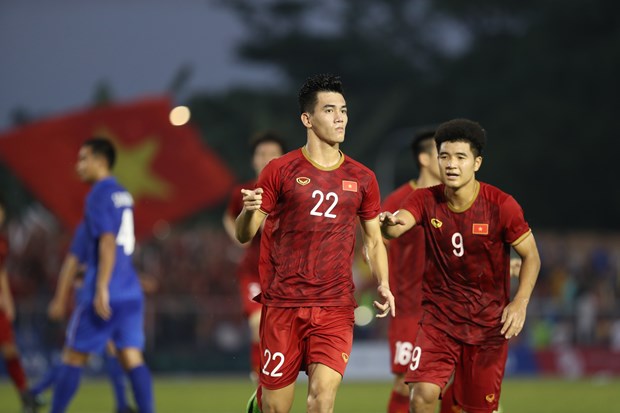 Nguyen Tien Linh (No. 22) celebrates after scoring the leveling goal for Vietnam in the match against Thailand on December 5 (Photo: VNA)

Shortly after the match at Binan stadium in the Philippines began, Thailand scored two continuous goals at the fifth and 11th minutes.

However, at the 15th minute, Nguyen Tien Linh of Vietnam broke through three Thai defenders in the box to head the ball in from a cross in the left wing.

In the second half, Vietnam were awarded a penalty kick after Linh had been fouled inside the area. Although Huynh Tan Sinh’s penalty was denied by Nont Muangnam, Vietnam retook the kick as the Thai goalkeeper had moved in front of the line before Sinh touched the ball.

This time, Linh made no mistake with his penalty, decisively driving the ball to his left to beat Muangnam at the 72nd minute.

Holding Thailand to a 2-2 draw is enough for Vietnam to secure the top position of Group B and go further in the tournament.

The team of head coach Park Hang-seo will play Cambodia, which rank second in Group A, on December 7, the same day with the other semifinal between Indonesia, which are in Group B’s second place, and Group A’s top team Myanmar./.