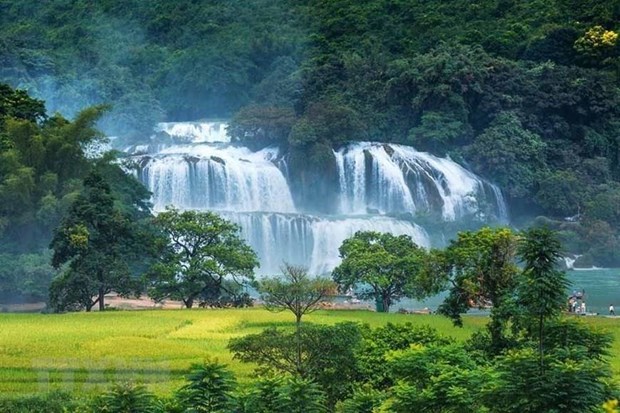 Ban Gioc is the largest natural waterfall in Southeast Asia and also the world’s fourth largest cross-border waterfall (Photo: VNA)
The two-day event is jointly held by the provincial Department of Culture, Sports and Tourism and the Trung Khanh district People’s Committee.

It is designed to promote the images of Cao Bang, Ban Gioc waterfall and cultural traits of ethnic groups in the province to domestic and foreign visitors, thereby contributing to the province’s socio-economic development, security-defence, investment attraction, tourism and trade.

The centrepiece of the festival is a light festival held on the waterfall, featuring modern sound, lighting and laser technology.

Various rituals and festive activities are also arranged, including a water procession ceremony to pray for peace along with favourable wind and rain; a photo exhibition and a folk singing event.

In addition, locals and visitors have the chance to join folk games such as tug of war, sack race, stick pushing and chestnut cracking.