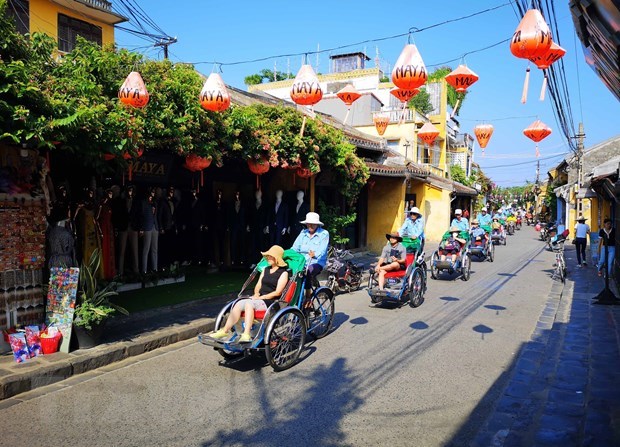 Tourists in Hoi An city of Quang Nam (Photo: VNA)

The office reported that in the first 11 months of this year, Vietnam received nearly 16.3 million foreign visitors, a rise of 15.4 percent over the same period last year.

At the same time, a drop of 18.3 percent was recorded for visitors from Laos and 37.5 percent for Hong Kong.

The number of European visitors rose 6.3 percent, while those from America were up 7.4 percent.

According to the GSO, revenue from tourism activities in the first 11 months was estimated to reach 41.7 trillion VND (1.8 billion USD), up 12.2 percent over the same time in 2018.

The 11-month results made the tourism sector confident of reaching the yearly goal of welcoming 18 million foreign visitors and earnings of 700 trillion VND, as December is the peak season for travelling.

In early December, Hanoi will host the second Vietnam high-level tourism conference, providing a chance for national and regional-level public-private dialogue, and aiming to seek measures and necessary actions to make a sustainable breakthrough for Vietnamese tourism.

A plan of actions to raise the competitiveness of Vietnamese tourism will also be discussed at the event, along with measures to raise the sector’s contribution to GDP to 10 percent in 2021, and ways to realize the initiative of building a common ASEAN aviation market in 2020./.