Phu Tho (VNA) – Activities within this year’s annual festival of the Hung Kings’ Temple, which falls on April 2, will be cancelled due to the acute respiratory disease caused by the SARS-CoV-2 (COVID-19), according to authorities of the northern province of Phu Tho. 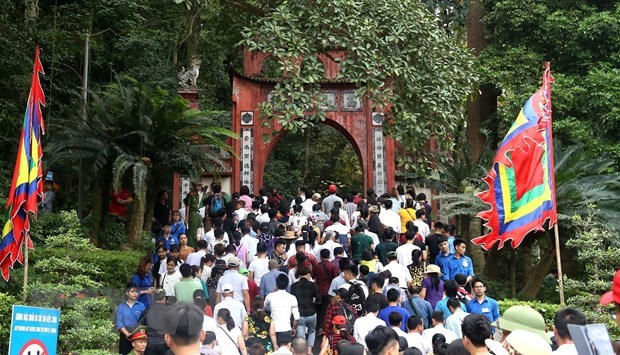 However, the part of commemoration will still be performed, including the incense offering ceremony – the most important ritual dedicated to the legendary founders of the nation.

Legend has it that Lac Long Quan married Au Co who later gave birth to a pouch filled with one hundred eggs, which soon hatched into a hundred sons, believed to be the ancestors of the Vietnamese nation. Their eldest son was made king, who named the country Van Lang and set up the capital in Phong Chau (nowadays Viet Tri city, Phu Tho province), beginning the dynasty of the 18 Hung Kings.

To honour their great contributions, a complex of temples dedicated to them was built on Nghia Linh Mountain, and the 10th day of the third lunar month serves as the national commemorative anniversary for the kings.

The worshipping of the Hung Kings was recognised as a UNESCO Intangible Cultural Heritage of Humanity in 2012./.