Hanoi (VNA) – Officials of 16 Asia-Pacific countries have voiced their commitment to accelerating negotiations on the Regional Comprehensive Economic Partnership (RCEP) agreement with the hope of finalising it by November, according to a Thai official. 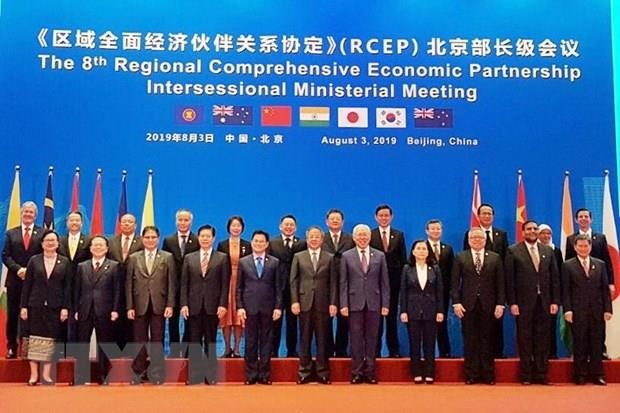 Head of the trade negotiations department under the Thai Commerce Ministry Auramon Supthaweethum said an ASEAN economic ministers’ meeting and an RCEP ministerial meeting will be held in Bangkok from September 3 to 10.

She said ministers will attempt to complete the RCEP negotiations in the hope that this trade pact will help promote trade growth in the region amid uncertainties about global growth.

The negotiations began in 2013, and the initial goal was to wrap them up in 2015. However, the deadline has been postponed repeatedly, reflecting the challenge in creating what would be the world’s largest free trade area amid the rise of protectionism and the escalating US-China trade tension.

According to the Thai department, seven of the 20 RCEP topics have yet to be agreed upon, including rule of origin, investment and intellectual property. It is hoped that progress can be made in those areas during the September meetings and a deal announced on November 4 when an ASEAN leaders’ summit concludes in Bangkok.

Once signed, the RCEP will form the world’s largest free trade area with about 3.5 billion people and 30 percent of the global gross domestic product. -VNA