Bangkok (VNA) – The Tourism and Sports Ministry of Thailand has cut its foreign arrivals forecast to 39-39.8 million this year, down from 40.2 million. 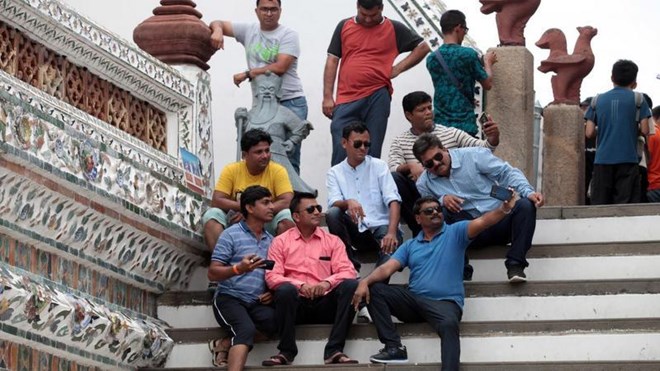 Foreign tourists pose for photos at Wat Arun, or the Temple of Dawn in Thailand (Photo: Bangkok Post)
Thai tourism in the first half this year saw foreign arrivals grow only 1.4 percent to 19.7 million, prompting the Thai ministry to revise down its target in July from 41.3 million to 40.2 million.

Local media quoted Thai Tourism and Sports Minister Phiphat Ratchakitprakarn as saying that he is confident the new projection of 39-39.8 million tourists is achievable as the government has been working to offer incentives to foreign visitors.

The minister said though the proposal to provide visa exemptions for visitors from China and India had not been considered by the cabinet ministers, he would continue to discuss concerns about security with related state agencies, hoping to reach a conclusion within one to two weeks.

Phiphat said the Thai cabinet is continuing to promote tourism in the remainder of this year through next year by extending the waiver of visa-on-arrival fees to 19 nations, which already covers China and India, from October 31 this year until April 30, 2020.

Governor of the Tourism Authority of Thailand Yuthasak Supasorn said the Thai cabinet believes the incentive will help draw some 20 million foreign tourists in the second half, maintaining tourism momentum to support the country’s 3 percent GDP growth this year.

Despite a decrease in foreign arrivals, especially from China, Yuthasak is positive that the goal of 3.38 trillion THB (109.8 billion USD) in tourism revenue this year is reachable. The value is a 9.5 percent increase from last year.

China still accounts for the biggest portion with 6.63 million visitors, a contraction of 3.3 percent, followed by Malaysia with 2.24 million, up 6.2 percent, and India 1.14 million, up 24 percent.-VNA