RoK, Malaysia to hold third round of free trade talks

Hanoi (VNA) – The Republic of Korea (RoK) will hold the third round of free trade talks with Malaysia this week with the aim of striking a deal before November, said the RoK Ministry of Trade, Industry, and Energy. 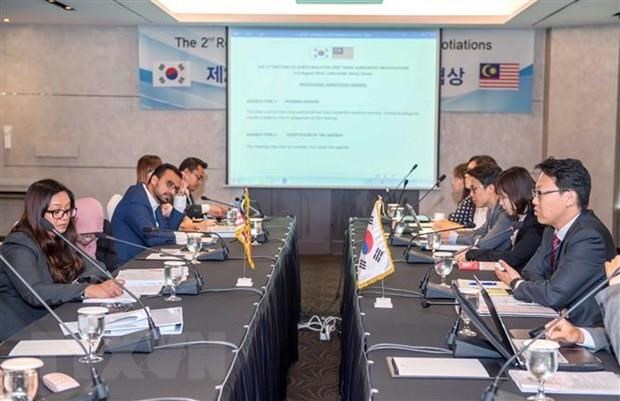 At the second round of free trade talks in Seoul on August 5 (Photo: Yonhap)
The two countries, which have held two rounds of talks since July, will discuss details of the bilateral free trade agreement from September 4-6.

Both sides will focus on sharing ideas for expanding their bilateral economic ties, along with setting details on the scope of products to be included in the deal.

The RoK already has a FTA with the Association of Southeast Asian Nations (ASEAN), but the country is seeking to broaden economic ties with individual members through separate free trade deals.

The RoK is making efforts to diversify its trading portfolio, especially amid the growing trade war between the US and China. The top two trading partners accounted for around 40 percent of the RoK’s annual outbound shipments in 2018.

The RoK’s exports plunged 13.6 percent in August from a year earlier, extending their on-year fall to the ninth month in a row.

If all talks underway are successful, the RoK will have FTA deals with all of its top five trading partners in Southeast Asia, including Vietnam and Singapore.-VNA