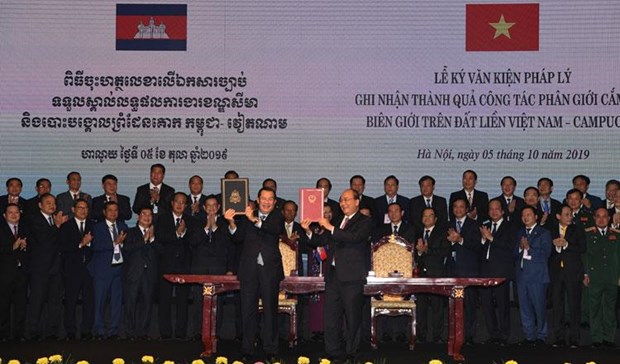 Newspapers of Cambodia emphasised that Vietnam held a warm and friendly welcome for PM Hun Sen, affirming that his Vietnam visit aims to consolidate and further strengthen cooperation in all fields between the two countries.

In its article titled “PM: Border treaties set to ensure peace, development”, the Phnom Penh Post quoted PM Hun Sen as hailing the agreements signed in Hanoi on October 5 as further steps towards totally solving the border issues and ensuring peace and development along the Cambodia -Vietnam border for generations to come.

It also cited Kin Phea, the director of the International Relations Institute at the Royal Academy of Cambodia, as saying that PM Hun Sen’s visit had helped strengthen ties with Vietnam, including trade and investment cooperation.

Meanwhile, the Khmer Times on October 7 ran an article with the title: “Cambodia, Vietnam ratify border work”, quoting the joint statement between the two countries as affirming that the work marks a historic milestone in the process of land border settlement between the two sides.

It said PM Hun Sen at a press conference after the signing of the documents said that both countries worked hard to demarcate the border, and he called on local authorities and peoples of both nations to join together to maintain the border markers and jointly transform border areas into zones of peace, friendship, cooperation and development for the harmony of the people of two countries.

According to the article, Vietnamese PM Nguyen Xuan Phuc hailed the documents as “historical agreements”, adding that Cambodia and Vietnam are close friends.

PM Phuc was reported to say the two sides will build the border to be stable, peaceful and sustainably developed and add that for the remaining 16 percent of the borderline which has yet to be demarcated, leaders of both nations will continue to work hard until the job is done.

Regarding the East Sea issue, Cambodian media reported that the two sides agreed that present tensions at the sea needs to be resolved at an early date in a peaceful way in accordance with international law, including the 1982 United Nations Convention on the Law of the Sea (UNCLOS).

For cooperation and investment between the two countries, the Cambodian press said that the two sides signed seven important cooperation documents, contributing to consolidating and deepening bilateral relations, adding that the two sides expressed their optimism and belief that the bilateral trade will top 5 billion USD in 2019 and will continue to increase in the coming years./.