Hanoi (VNA) – Indonesian counterterrorism police have foiled a series of planned suicide bombings in some cities ahead of the October 20 swearing-in of President Joko Widodo, who was re-elected for a second term in the April 17 presidential election. 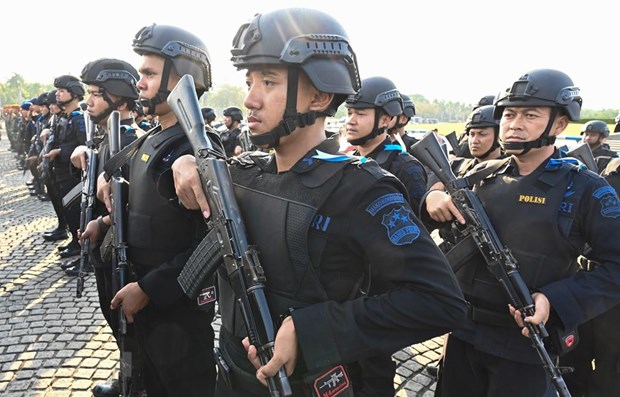 Illustrative image (Photo: AFP)
Speaking at a press conference, national police spokesman Gen. Dedi Prasetyo said at least four suicide bombers had prepared for the attacks using high-explosive bombs made of various substances, including a potent toxin called abrin which could pose a severe threat to public health and safety.

Dedi said these bombs are different from those usually assembled by terrorist groups and could kill 100 people with less than 0.7 micrograms.

Since September, the elite counterterrorism unit Detachment 88 has arrested 27 terrorist suspects. All of the suspects are members of Jamaah Ansharut Daulah, or JAD, a Muslim militant network linked to Islamic State.

JAD staged several terrorist attacks in Indonesia, including the multiple suicide attacks in East Java and Riau provinces in May 2018, and suicide strikes in a police station and Starbucks Cafe in the heart of Jakarta that killed eight people in January 2016./.