Bangkok (VNA) – The 18th ASEAN Economic Community (AEC) Council Meeting took place in the Thai province of Nonthaburi on October 31 to prepare for the 35th ASEAN Summit slated for the next few days. 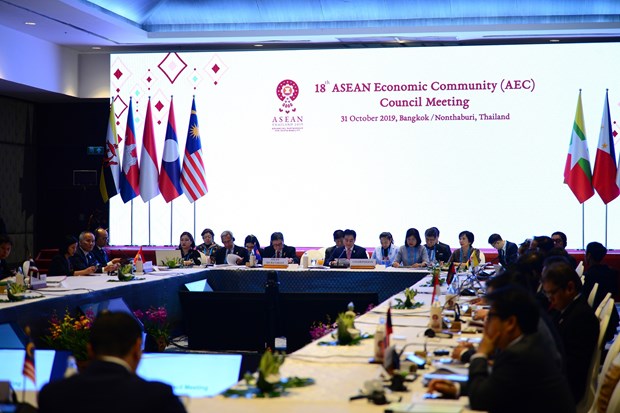 Opening the event, Thai Deputy Prime Minister and Minister of Commerce Jurin Laksanavisit said the formation of the AEC plays an important role in the economy of the region and the world.

He noted ASEAN is attracting attention from investors around the globe, adding that foreign investment in ASEAN increased 5.3 percent in 2018, which was a positive sign for the region amidst growing tensions among big economies and the global economic recession.

At the meeting, the AEC Council reviewed the implementation of the AEC Blueprint 2025 and made 10 recommendations to push ahead with the work.

They also looked back on the realisation of initiatives launched by Thailand, which holds the ASEAN chairmanship in 2019. They noted that 10 out of the 13 priorities Thailand had set have been completed, and the three remaining will be completed by the end of this year.

The AEC Council chairs the building and implementation of the AEC Blueprint 2025. The blueprint consists of five interrelated and mutually reinforcing characteristics, namely: a highly integrated and cohesive economy; a competitive, innovative, and dynamic ASEAN; enhanced connectivity and sectoral cooperation; a resilient, inclusive, people-oriented, and people-centred ASEAN; and a global ASEAN./.