Seoul (VNA) – In a recent article, President of the Republic of Korea (RoK) Moon Jae-in expressed his belief that ASEAN member states will join in the journey toward establishing permanent peace on the Korean Peninsula as reliable friends and advisers. 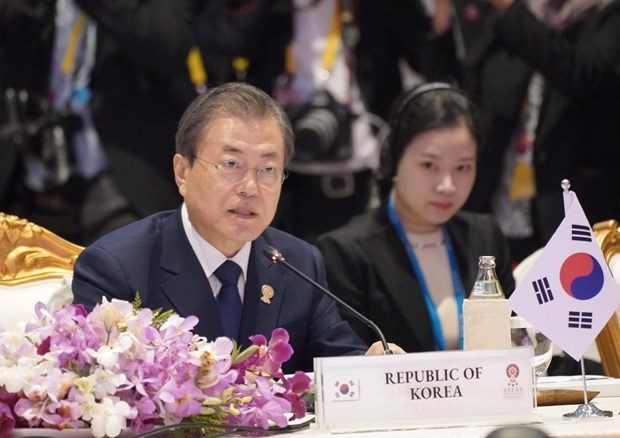 President of the Republic of Korea Moon Jae-in speaks at the 22nd ASEAN Plus Three Summit in Bangkok on November 4 (Photo: Yonhap/VNA)

The article was contributed to the Asia News Network ahead of the 2019 ASEAN-RoK Commemorative Summit in Busan city of the RoK on November 25.

The President noted that the two summits between the Democratic People’s Republic of Korea and the US held in ASEAN member states helped restart dialogue over peace on the Korean Peninsula.

He said he is looking forward to in-depth discussions about peace on the Korean Peninsula and in East Asia taking place at the upcoming event as well.

According to President Moon, there still remain critical junctures for peace on the Korean Peninsula, and peace on the Peninsula is closely related to stability throughout East Asia.

“I believe ASEAN member states that have actively helped advance peace through dialogue and mutual understanding over the past decades will also join in the journey toward establishing permanent peace on the Peninsula as reliable friends and advisers,” he wrote.

Moon added the world now faces new challenges such as protectionism, the Fourth Industrial Revolution and non-conventional security threats, including transnational crimes. The ASEAN-RoK Commemorative Summit will serve as a venue for both sides to seek ways for a more prosperous and peaceful future.

On the sidelines of the summit, the RoK President is set to have bilateral meetings with ASEAN leaders./.