Hanoi (VNA) – Indian Defence Minister Rajnath Singh has emphasised the need to protect the rights of states that are not party to negotiations between ASEAN and China for a Code of Conduct in the East Sea (COC), according to the India’s The Hindu newspaper. 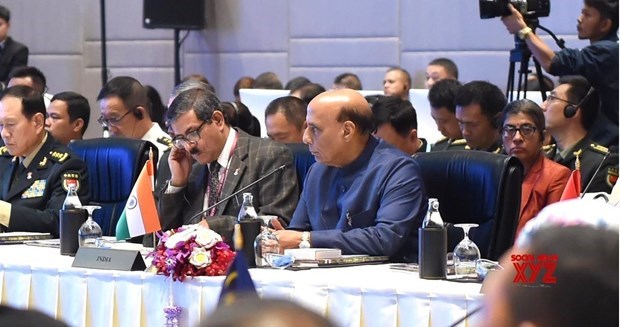 Indian Defence Minister Rajnath Singh at the ADMM Plus in Bangkok (Photo: VNA)
The newspaper quoted Singh as saying at the sixth ASEAN Defence Ministers’ Meeting Plus (ADMM Plus) in Bangkok that it is natural for the international community to have an interest in open sea lanes of communication. The minister expressed hope that the situation remains stable, without the use, or threat of use of force, or militarisation of the region.

He also hoped that the outcomes of these talks would be in keeping with all relevant international laws, including the United Nations Convention on the Law of the Sea (UNCLOS) and promote freedom of navigation, overflight and lawful commerce in the East Sea.

On the Democratic People’s Republic of Korean issue, Singh said India looks forward to progress on the effort to de-nuclearise the Korean peninsula through dialogue and to address all related issues including “the proliferation trail that links South and East Asia”.

At the meeting, ministers highlighted the need to respect international law, including the 1982 UNCLOS and wished to reach an effective and practical COC./.