RoK to clarify vision for closer ties with ASEAN

Hanoi (VNA) – The Republic of Korea (RoK) plans to adopt a monumental statement on its future relations with Southeast Asian countries during an upcoming summit in Busan, Cheong Wa Dae announced November 20. 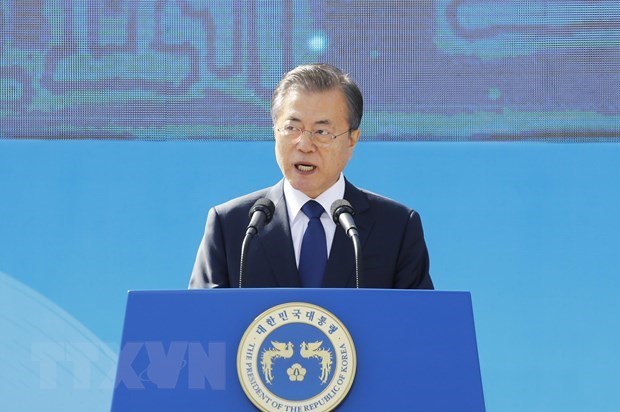 President of the RoK Moon Jae-in (Photo: Yonhap/VNA)
The RoK-ASEAN joint vision statement will serve as a framework for bilateral cooperation going forward, according to Joo Hyung-chul, an adviser to President Moon Jae-in for economic affairs.

The two-day ASEAN-RoK Commemorative Summit is scheduled to open on November 25 in the southern port city in celebration of the 30th anniversary of the launch of the two sides’ dialogue relations, Yonhap News Agency reported.

Moon is holding group summit talks, composed of two sub-sessions, with his counterparts from the 10 ASEAN member states. A string of separate bilateral meetings between Moon and all 10 other leaders will also take place on the sidelines.

In the declaration to be adopted at the end of the Busan session, the 11 participating nations will assess the accomplishments of partnerships in various sectors over the past three decades and highlight the significance of Seoul’s New Southern Policy in further strengthening ties, Joo told reporters.

The RoK also plans to adopt a Han River-Mekong River declaration on promoting ties with the “Mekong five” nations – Cambodia, Laos, Myanmar, Thailand and Vietnam — at the inaugural Mekong-RoK summit slated for November 27.

Meanwhile, the RoK is seeking to reach free trade agreement (FTA) deals with the Philippines and Malaysia when their leaders visit Busan./.