Hanoi (VNA) – The leaders of Republic of Korea (RoK) and Brunei agreed on November 24 to ramp up partnerships between the two sides on smart cities and other ICT-related programmes in a joint response to the fourth industrial revolution. 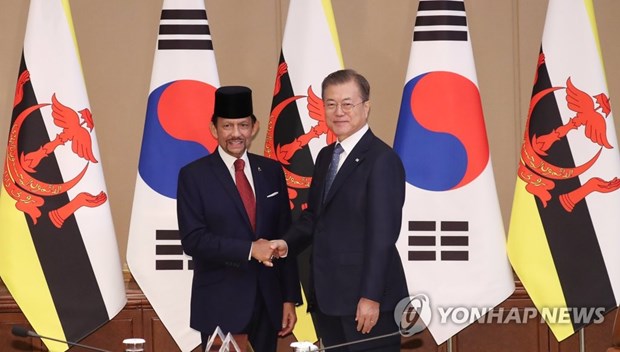 The deal came at a summit between President Moon Jae-in and Sultan Hassanal Bolkiah at the presidential Blue House. The Sultan of Brunei is on a state visit to the RoK and also plans to attend the ASEAN-Republic of Korea Commemorative Summit to open in the southern port city of Busan on November 25.

The leaders had a broad range of discussions on “substantive cooperation” for the development of RoK-Brunei relations in a forward-looking way and further strengthening of RoK-ASEAN ties, according to Moon’s office.

Moon pointed out that the two countries have continued cooperation in the infrastructure and energy fields on the basis of “trust and friendliness” over the past 35 years since the establishment of bilateral diplomatic ties.

There are more fields for the two nations to cooperate,” he told the Sultan, adding that potential for cooperation is indefinite ranging from cutting-edge industries such as ICT, smart city and e-government to the defense and arms industry.

Moon expressed his hope for a “harmonious push” for Brunei’s “Vision 2035” project and the RoK’s New Southern Policy, saying it would lead to win-win prosperity.

The Sultan agreed to seek synergy between the two major policies. As a country coordinator for ASEAN-RoK dialogue this year, he said, Brunei will keep closely cooperating with the RoK.

The leaders agreed on the importance of creating new growth engines related to the Fourth Industrial Revolution and decided to step up “concrete cooperation” in science and technology, ICT and e-government sectors./.