Canberra (VNA) – The Committee of the Association of Southeast Asian Nations (ASEAN) in Canberra held a ceremony in the Australian capital city on August 13 to celebrate the bloc’s 52nd founding anniversary (August 8). 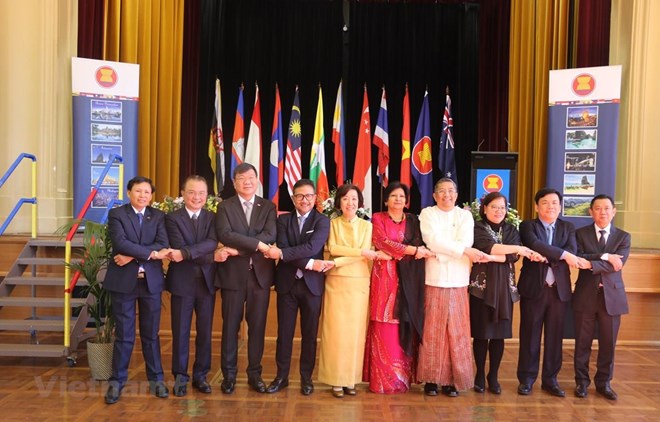 The ambassadors of ASEAN countries to Australia pose for a photo at the ceremony in Canberra on August 13 (Photo: VNA)

The event saw the presence of Governor-General of Australia David Hurley and his spouse, ambassadors and diplomats of ASEAN countries, along with many senior officials of the Australian parliament and government. Vietnamese Ambassador Ngo Huong Nam and members of Vietnam’s representative agencies in Australia also attended the celebration.

In his speech, Myanmar Ambassador Tha Aung Nyun, who is also holding the rotational chairmanship of the ASEAN Committee in Canberra, said after 52 years, ASEAN has become a politically cohesive, economically integrated and socially responsible community that is oriented towards and centres on people. Its member countries have stayed united in diversity and together developed and managed differences among them in a positive and constructive manner.

ASEAN is working towards a full community which was set up on December 31, 2015. To that end, its members pledge to effectively work with the bloc’s dialogue partners and other relevant parties while maintaining its centrality and solidarity, he stressed.

Regarding ASEAN-Australia relations, the Myanmar Ambassador hailed the strides in their dialogue relationship over the last 44 years, with the most recent demonstration being the successful ASEAN-Australia Special Summit in Sydney in March 2018 and the adoption of the Sydney Declaration.

He affirmed that ASEAN welcomes Australia’s support for its central role and pledges to cooperate with the country via ASEAN-chaired mechanisms.

The diplomat highlighted breakthroughs in ASEAN-Australia economic ties over the past years. Bilateral trade reached 65.5 billion USD in 2018, making it the seventh biggest trade partner of ASEAN among the grouping’s dialogue partners.

Meanwhile, the environment for the two sides’ businesses to operate has been improved through the removal of trade barriers under the ASEAN-Australia-New Zealand Free Trade Area. They are also working towards the signing of the Regional Comprehensive Economic Partnership (RCEP), which gathers the 10 ASEAN member nations, Australia and some other countries, he added. 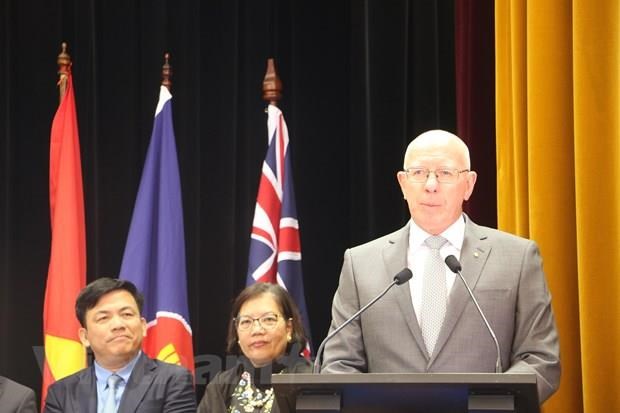 Governor-General of Australia David Hurley speaks at the ceremony in Canberra on August 13 (Photo: VNA)

At the ceremony, Governor-General of Australia David Hurley affirmed his country’s support for and high valuation on the dialogue relationship with ASEAN.

He noted regional forums that focus on ASEAN but are open to international partners like the East Asia Summit (EAS) and the ASEAN Regional Forum (ARF) provide Australia and other partners with mechanisms for effective bilateral and multilateral engagement in the region.-VNA