Bangkok (VNA) – Minister of Public Security General To Lam led a Vietnamese delegation to the 13th ASEAN Ministerial Meeting on Transnational Crime (AMMTC-13) and relevant meetings, which kicked off in Bangkok, Thailand, on November 27. 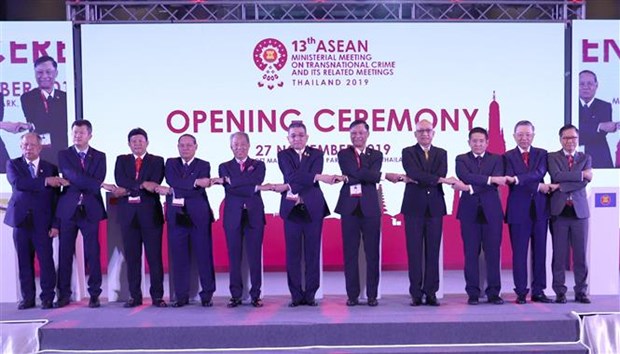 Ministers pose for a group photo (Photo: VNA)
Speaking at the plenary session of AMMTC-13, General Lam briefed participants on the results of transnational crime combat in Vietnam since the AMMTC-12, while emphasising Vietnam’s commitment to actively and responsibly participate in ASEAN’s cooperation frameworks in general and cooperation mechanisms in combating transnational crime in particular in the context that the country will undertake the role as the ASEAN Chairmanship and a non-permanent member of the UN Security Council in 2020.

He suggested ASEAN member nations supporting Vietnam’s initiative to list antiques smuggling combat as a priority of cooperation under the ASEAN Senior Officials Meeting on Transnational Crime (SOMTC) and AMMTC.

Law enforcement agencies of ASEAN member states should continue to maintain and strengthen cooperation in the fight against transnational crime, enhance the sharing of experiences in fighting drug crime and joint investigations, and pay attention to improving the capacity for law enforcement staff, Lam said.

He also called for regional coordination in effectively implementing criminal judicial assistance requests among ASEAN countries and their partners, with priority given to negotiations to soon sign agreements on extradition and transfer of sentenced persons, and legal assistance in criminal matters.

Participants to the event acknowledged and highly valued efforts made by the regional countries in fighting transnational crime, especially in implementing agreements signed at AMMTC-12 in Myanmar, and the ASEAN Plan of Action to Combat Transnational Crime in 2016-2025.

The meeting issued a joint statement, in which the ministers welcome Vietnam to host AMMTC-14 and related meetings in 2020, and praise efforts by the SOMTC working group on counter terrorism in the fight against violent extremism and radicalisation.

The ASEAN ministers are scheduled to have meetings with senior officials in charge of issues related to transnational crime from ASEAN’s dialogue  countries on November 28./.