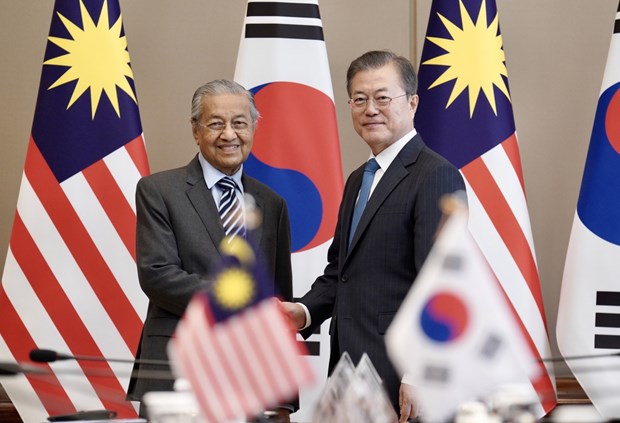 In a post-summit press release, Moon’s office said the leaders pointed out that the bilateral relations have spread beyond trade and investment to “forward-looking” partnerships.

In that regard, they “reached a deal in principle” to upgrade the Republic of Korea (RoK)-Malaysia ties to a strategic partnership,” according to Cheong Wa Dae.

The leaders shared the view that it is important to introduce a bilateral free trade agreement (FTA) to accelerate “economic solidarity” between the two sides. They agreed to continue efforts toward signing a “high-level, mutually beneficial” deal on the basis of the relevant negotiations held so far.

In response, Mahathir reaffirmed his support for Seoul’s initiative to transform the Demilitarized Zone (DMZ) bisecting Korea into an international peace zone.

Following the summit, Moon and Mahathir attended the signing ceremony for four memorandums of understanding (MOUs) on promoting cooperation on information and communications technology, digital government, health care and medical science, and water and sewage management./.