Hanoi (VNA) – Philippine President Rodrigo Duterte said on late March 9 that the total number of coronavirus SARS-CoV-2 cases in the country has risen to 24, asking for all school closure in Manila capital city in four days from March 10. 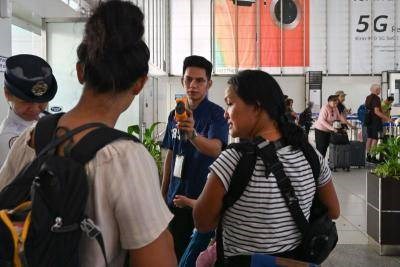 Airport personnel checking the temperature of a passenger at the departure area of the international airport in Manila (Source: AFP)

Duterte told a news conference that the four new COVID-19 cases were reported in Metro Manila and the outlying Bulacan province. However, he said there is no epidemic yet in the country despite the increasing number of cases.

Earlier the same day, the President signed a proclamation declaring a state of public health emergency due to the COVID-19 threat.

According to the health ministry, one patient of the newly identified had travelled to Iran between February 20-27. He was confirmed to be infected with COVID-19 on March 8.

Among Malaysia’s second wave of cases beginning late February, only six cases had travel history, while the vast majority were infected locally with close contacts, the ministry said.

The ministry also announced a collaboration with the country’s private medical sector to provide home testing for COVID-19, without having to visit a healthcare facility. It also repeated its advice that Malaysians avoid travelling to territories or cities affected./.