Bangkok (VNA) – Exports of Thai rice have been on the rise as many countries are stocking up on food supplies due to the rampant COVID-19 outbreak, said President of the Thai Rice Exporters Association (TREA) Chookiat Ophaswongse. 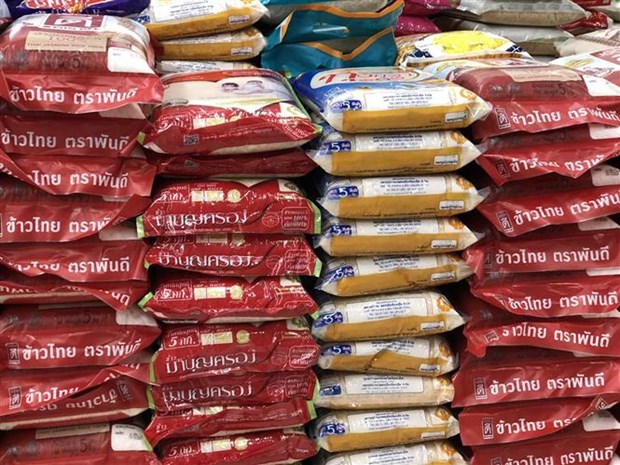 Sacks of rice at a mall in Bangkok, Thailand (Photo: VNA)

Local media quoted Chookiat as saying that many rice importers worldwide want Thai rice shippers to deliver 100 percent of the order quantity immediately, instead of half in March and the rest in April as they used to ask in the past.

The spurt in demand has been a boon for rice producing countries, and also increased the rice price in the global market. The price of Thai rice rose to between 450 USD and 460 USD per tonne from 410 USD per tonne.

Due to the recent rise in demand, Thailand’s rice exports in February were estimated at 630,000 tonnes. Chookiat noted that the growth of rice exports at this time depends on the COVID-19 situation. If the situation recovers, the rice orders will decrease.

He added that another related factor is export of rice by China. The country would suspend its exports to reserve stocks for its own food security. Overall Thailand’s rice exports this year would be near the targeted 7.5 million tonnes, he said.

In 2019, Thailand shipped 7.58 million tonnes of rice abroad, raking in 131 billion THB (over 4 billion USD), down 32 percent in volume and 25 percent in value compared to the previous year.