HCM City (VNS/VNA) – HCM City needs to assess the features of its cultural and architectural identity so that it can create viable urban public spaces, experts said at a recent seminar. 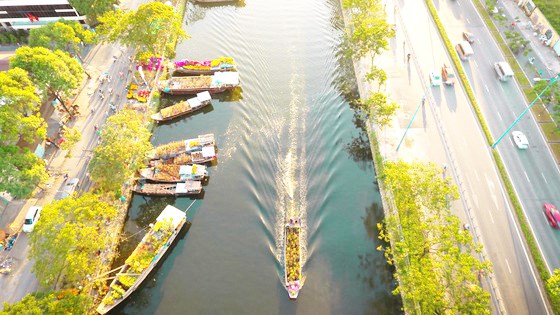 The river-based life of people in Ho Chi Minh City (Photo: sggp.org.vn)
The seminar, which discussed solutions for the development of public cultural spaces, attracted architectural and cultural experts as well as local leaders. It was organised by the municipal Party Committee’s Propaganda Department, the Council for Theory, Literature and Arts Criticism and the Association of Architects.

Public cultural spaces are common places for community activities that all residents have the right to freely access and use such as squares, parks, pedestrian streets, surface water, spaces along the riverbank, and sidewalks.

They play an important role in strengthening social cohesion and improving the quality of life and physical and spiritual health of residents.

The city government should develop solutions on public space development to bring the most practical benefits to the community in a humane way, she said.

The city has been developed around rivers and canals, so its typical identity is a river-based culture.

Nguyen Tan Van, former chairman of the city’s Association of Architects, said developing public spaces along rivers and canals would create a unique identity for the city.

Sharing the same idea, architect Nguyen Anh Tuan of the city’s Department of Planning and Architecture, said that the landscapes along rivers and canals have the potential to become the backbone of urban cultural activities.

“The city should create public spaces associated with trade, entertainment and cultural activities on rivers and canals.”

More efforts and solutions are also needed to prevent pollution and improve the landscape along rivers and canals, he said.

Dr. Le Hong Phuoc from the HCM City University of Social Sciences and Humanities said the city should create a public space for don ca tai tu (Southern folk music) which has been recognised by UNESCO as an intangible cultural heritage.

Don ca tai tu performances could be organised at existing public spaces in the city such as Book Street on Nguyen Van Binh street in District 1.

The city should also set up a street to serve as a place for performing traditional arts, such as Huyen Tran Cong Chua street in District 1, he said.

Urban planning calls for 7sq.m of public space per capita but the current public space in the city is just 1.06sq.m per person.

The city should also learn from other countries’ experiences in building public space and consult leading architects.

The city will also develop an annual lantern festival in District 8.

Proposed solutions, ideas and suggestions at the seminar will be recorded to study in depth. These will help the city prepare a clear roadmap for building public spaces, he added./.