Cao Bang (VNS/VNA) – Tau Sai is an important event celebrating the coming of age of men and women among the Dao Tien ethnic minority group in the northern province of Cao Bang. 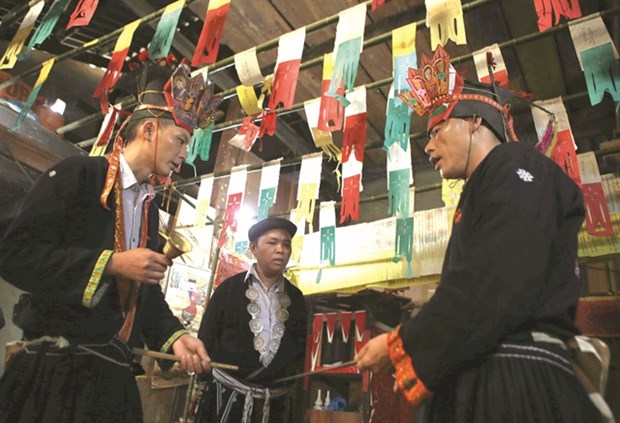 The ceremony is hosted by the head of the extended family and 14 shamans. (Photo: VNA)

The ceremony has been held for hundreds of years, honouring the principles of marriage, family happiness and uniting people in their family and community.

In the Dao group’s tradition, rank or title is very important, which marks the moment someone can have an important voice in the community and have the right to host various important rituals.

The person most honoured at the ceremony is highly respected by the community and a “senior master” who is a high-ranked shaman with enough prestige to host important ceremonies for.

Due to its complexity and long preparation, the community holds a Tau Sai ceremony only once every 30 years or so.

To prepare for Tau Sai ceremony, the head of the extended family will meet with the involved households to choose the matured people and the right time for the ceremony.

Tau Sai ceremony is an important event in the community of Dao Tien ethnic minority group.

The chosen people will then prepare costumes and practise praying ceremonies to be able to host important events. The preparation period may last for half a year to a year.

The Tau Sai ceremony includes two rituals: Sin Pe Dang and Tau Sai.
The former is conducted after preparing costumes, wine, rice, vegetables, other food, incense and paper for writing prayers on. The head of the extended family will visit a master (who is often of another family) to ask for his help to choose a suitable day for the latter ceremony.

Sin Pe Dang is held one to three months before the main event Tau Sai, which aims to inform the gods and ancestors that the extended family has prepared for the big day.

From that time, the whole extended family leads monks’ lives to clean themselves for the ritual.

The Sin Pe Dang ritual is often held for two days and one night, hosted by three shamans.

Fourteen shamans host the Tau Sai ceremony and each of them will bring up to three helpers.

A Tau Sai ceremony often lasts three to five nights with various activities, including prayer ceremonies to inform ancestors and gods about the important event.

Today, the main ceremony has been shortened down to two or three days with fewer procedures and expenses.

The ceremony also aims to wish for peace, prosperity and luck for the family. /.