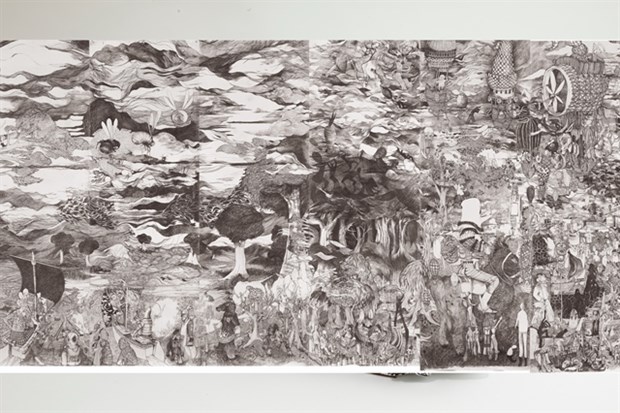 “Les préparatifs” (Preparation), a drawing by French artist Francois Andes (Photo courtesy of the organiser)
The showcase, co-organised by the gallery and the French Institute in Vietnam, features drawings, animation, sculptures, costumes and masks as well as musical compositions commissioned from acclaimed composers Samir Odeh-Tamimi of Israel and Sergio Rodrigo of Brazil.

Andes and Carvalho raise questions about the evolution of man’s relationship to nature, especially to the ecosystems of watercourses and forests.

On display are works with images of rivers and forests, reflecting the transformations and disturbances of nature and the predatory behaviour of man on earth.

The exhibition which opened last week also includes costumes which he created for the dance performance BWV 988: Thirty Possibilities of Transgression, which premiered at the Teatro Plínio Marcos in Brazil in 2019.

Andes studied graphic arts at the Esaat Upper School Applied Arts and Textile in Roubaix, France, and attended short-term courses on painting and printing at the National School of Visual Arts of La Cambre and the Royal Academy of Fine Arts in Brussels, Belgium.  He took part in several artistic residency programmes in France, Brazil and the Republic of Korea, including the Villa Saigon artistic residency programme initiated by the French Institute in 2016, 2018 and 2019.

Andes will showcase his works at the Library Alexis de Tocqueville in Caen and at the Korean Cultural Center of the Embassy of the Republic of Korea in Paris this year.

His works have been exhibited in notable institutions such as the Bispo do Rosario Museum of Contemporary Art in Brazil, Château de Flers Museum and Lille 3000 association in France.

The exhibition will close on May 28./.