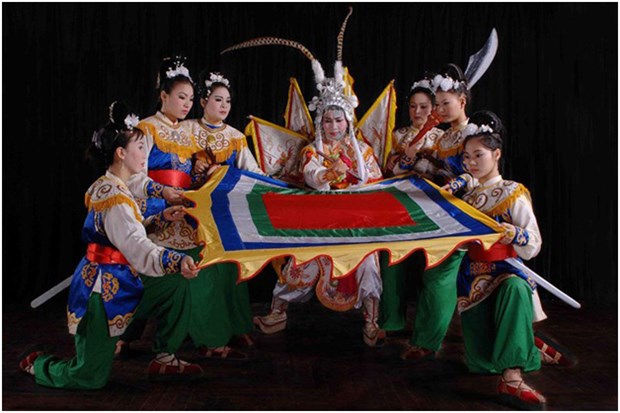 The events included a welcome ceremony for Vietnamese Vice President Dang Thi Ngoc Thinh and her entourage who paid an official visit to India from February 11-13, the 34th Surajkund International Crafts Mela-2020 and an international food and fashion exhibition.

Tuong, or classical drama, is a combination of dialogue, dance, song and music that are highly stylised and imbued with symbolism.

With a history of around 800 years, tuong has steadily developed and evolved through various aspects ranging from make-up and costumes to music.

The Vietnam Tuong Theatre has been making significant contributions to preserving and developing the traditional art form. It has been recognised by the State with a first-class Labour Order and a first-class Independence Order.

The theatre has also won several awards at national drama festivals including gold medals at the 2019 National Festival of Tuong and Folk Songs and the 2012 Festival of Vietnamese Nationalities’ Traditional Musical Instruments, and the A Prize at the 1996 Theatre Awards held by the Vietnam Association of Theatre Artists. /.