The Van Don – Mong Cai highway, which is scheduled for completion and operation on June 30, aims to create favourable conditions for the northeastern province of Quang Ninh to make breakthrough developments and promote economic links in the region. 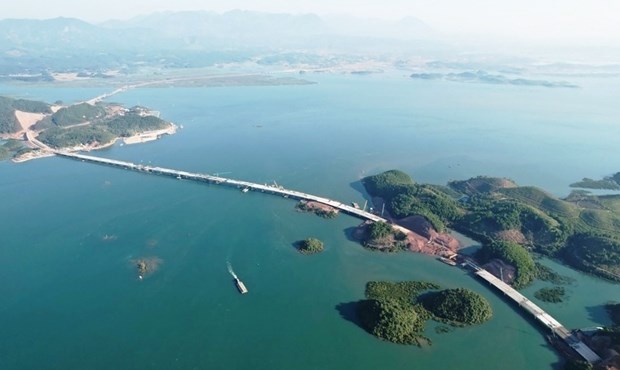 Nguyen Tien Oanh, Director of the Executive Board of the highway project (the Tien Yen – Mong Cai section), said it has taken time to complete this section – which extends from Bach Dang bridge to the Mong Cai international border gate, because of difficulties caused by the COVID-19 pandemic and other reasons.

However, the foundation of the sector has been basically completed and is entering the finishing stages, he said.

According to representatives from the Ministry of Transport, the Van Don – Mong Cai highway, which is part of the Hanoi – Quang Ninh highway, plays a strategic role for the socio-economic development of Quang Ninh and other northern localities.

According to the management board of Quang Ninh transport construction investment projects, the construction of the highway project started on April 3, 2019, divided into two sub-projects.

Once completed, the road will shorten the travel time from Van Don to Mong Cai from two hours to nearly one hour.

Besides, it will connect with the Ha Long – Hai Phong and Ha Long – Van Don highways, creating the longest highway in Vietnam that runs from the northwestern province of Lao Cai to Mong Cai in Quang Ninh province via Hanoi and Hai Phong port city.

The highway will serve as an important transport gateway linking Vietnam and China and countries in the Association of Southeast Asian Nations (ASEAN), helping boost cross-border trade and turning Quang Ninh province into a trade and service hub.

The Ha Long – Hai Phong Expressway was put into service in September 2018, while the Ha Long-Van Don Expressway became operational in December the same year.