Hanoi (VNA) – Politburo member and Chairman of the Party Central Committee’s Economic Commission Nguyen Van Binh hosted a reception in Hanoi on October 30 for Minister of Finance, Minister for Sport and Recreation and Associate Minister for Arts, Culture and Heritage of New Zealand Grant Robertson. 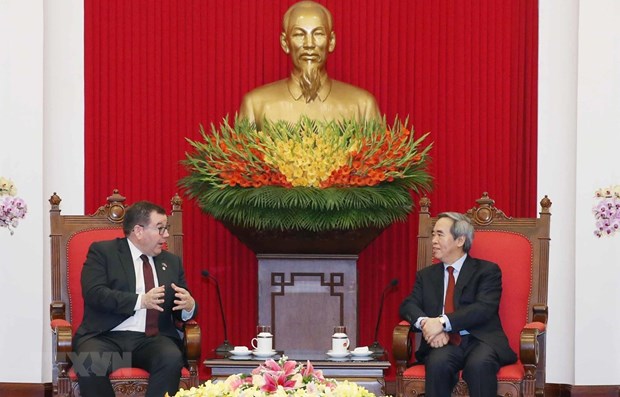 Binh expressed his delight at the development of bilateral ties in politics, external affairs, economy-trade-development assistance, education-training, and people-to-people exchange as the two countries are celebrating the 10th anniversary of comprehensive partnership this year and the 45th founding anniversary of diplomatic ties next year.

Since the establishment of the comprehensive partnership in 2009, two-way trade has grown by 14 percent annually, exceeding the 1 billion USD benchmark in 2018, he said.

The Party official expressed his belief that the figure will rise to 1.7 billion USD next year on the back of the Comprehensive and Progressive Agreement for Trans-Pacific Partnership (CPTPP) of which both nations are members.

He expected that New Zealand and the Association of Southeast Asian Nations (ASEAN), and New Zealand and Vietnam in particular would enhance collaboration to fully realise the ASEAN-Australia-New Zealand Free Trade Agreement and soon conclude negotiations on the Regional Comprehensive Economic Partnership (RCEP).

Both sides agreed to continue stepping up ties in promising fields such as education and labour amid the fourth Industrial Revolution.

Robertson, for his part, affirmed that New Zealand highly evaluated Vietnam’s socio-economic development, considering the country an important partner in the region.

New Zealand pledged to support and work closely with Vietnam next year when Vietnam will become the ASEAN Chair, and New Zealand and ASEAN celebrate the 45th anniversary of dialogue relations and the fifth anniversary of strategic partnership, he said.

The minister wished that Vietnam would share its experience when New Zealand hosts the Asia-Pacific Economic Cooperation (APEC) forum in 2021./.