Hanoi (VNA) – A Vietnamese delegation has emphasised the importance of multilateralism at the 58th session of the Asian-African Legal Consultative Organisation (AALCO) recently held in Dar es Salaam capital of Tanzania. 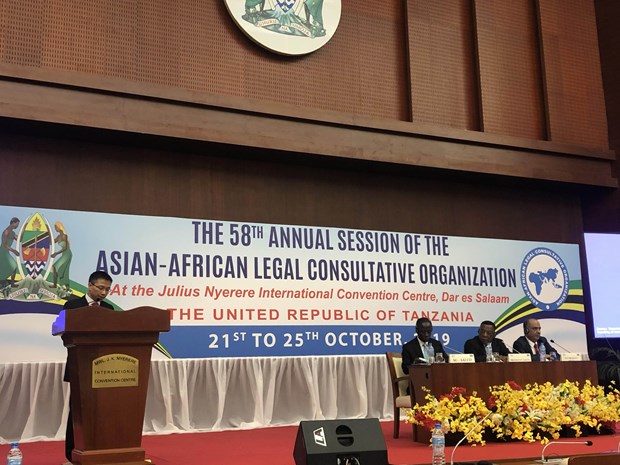 The annual session, themed “Multilateralism and International Order based on International Law”, took place from October 21 to 25.

Speaking at the event’s general debate, Chu Tuan Duc, Deputy Director of the Foreign Ministry’s Department of Law and International Treaties, stressed the importance of multilateralism, with the United Nations (UN) playing the central role, as well as the basic principles of international law recognised by the members in the UN Charter.

The official added that Vietnam has been actively contributing to multilateral forums, as well as the codification and development of international law, particularly when it will serve as a non-permanent member of the UN Security Council for 2020-2021 and ASEAN Chair in 2020.

At the session, representatives of the AALCO members and guests, including experts and scholars, discussed issues of common concern, including the law of the sea (preservation and sustainable use of biodiversity beyond national jurisdiction; freedom of navigation in international seas and straits; and illegal, unreported and unregulated fishing); the peaceful settlement of disputes; international law on the cyber space; the International Trade and Investment Law; and topics in the agenda of the UN’s International Law Commission.

Participants affirmed their countries’ respect for the principles of international law as enshrined in the UN Charter, considering these as the basic to deal with emerging challenges and promote multilateralism and rules-based international order.

The Vietnamese delegation delivered speeches on almost all topics. It highlighted the importance of international law and called for the peaceful settlement of disputes, including those in the East Sea, and for restraint from unilateral actions that may complicate the situation, escalate tensions or threaten regional and global peace and security.

At its 58th session, the AALCO admitted the Philippines as its new member.

The AALCO was founded under the name Asian Legal Consultative Committee in Bandung city of Indonesia in 1956. It was renamed as it is today in 2001 to reflect the expansion of its membership to Africa. The organisation currently consists of 48 member states.

Vietnam became an official member of the AALCO in 2017./.