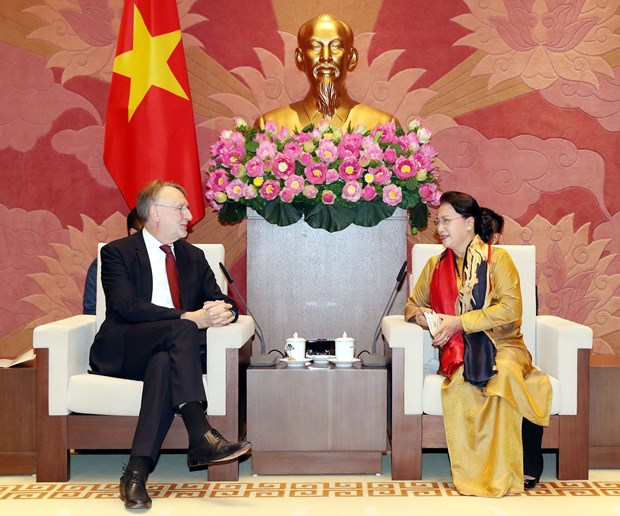 The host congratulated Lange on his re-appointment as head of the INTA, speaking highly of his active contributions to the friendship and cooperation between the Vietnamese NA and the European Parliament.

She noted with satisfaction that Vietnam and the European Union (EU) inked the bilateral Free Trade Agreement (EVFTA) and Investment Protection Agreement (EVIPA) in June this year.

Vietnam treasures and wishes to strengthen the comprehensive cooperation with the EU, especially in economy and trade. Therefore, it will fully and seriously carry out the commitments in the two agreements, including those relevant to sustainable development, Ngan stressed.

The chairwoman affirmed that Vietnam always considers the EU one of its leading partners, particularly in terms of economy, trade and investment.

She added the signing and ratification of many legal documents and the frequent mutual visits by the two sides’ leaders in the first half of this year reflect the prioritisation of bilateral ties in each side’s foreign policy, and this creates an increasingly solid foundation and opens up new prospects for Vietnam-EU relations.

Lange said during the INTA delegation’s working trip to Vietnam, they had a meeting with the Ministry of Industry and Trade and learnt that this ministry is working with relevant agencies to build a plan for implementing the EVFTA and EVIPA to ensure the full and effective implementation of the deals after they are ratified.

At the meeting, both host and guest shared the view that on the basis of the sound cooperation and with an open dialogue mechanism, Vietnam and the EU will continue coordinating closely and supporting each other during the ratification of the EVFTA and EVIPA.

They said that as following ratification, implementation is very important, the Vietnamese NA and the European Parliament are ready to work together to discuss and seek solutions to issues emerging to concretize the benefits these agreements will generate for both sides’ peoples and businesses./.