Hanoi (VNA) – Minister of Public Security Gen. To Lam has expressed his delight at the fruitful development of relations between Vietnam and the European Union (EU) over the past years, especially in trade and investment. 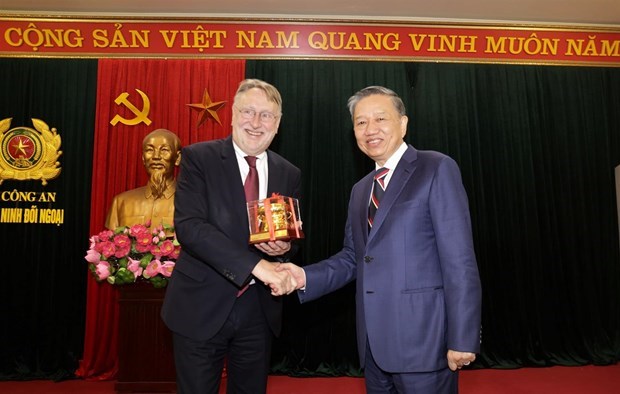 During a reception in Hanoi on October 30 for Chairman of the European Parliament (EP)’s Committee on International Trade Bernd Lange, Lam spoke highly of the role of the EU, EP and Lange in facilitating the signing of the EU – Vietnam Free Trade Agreement (EVFTA) and the EU – Vietnam Investment Protection Agreement (IPA) in late June 2019.

He wished that Lange and members of the committee would support the ratification of the two agreements as soon as possible.

Lam said once approved, the EVFTA will open up a new period of bilateral economic cooperation, adding that the Vietnamese National Assembly plans to approve the deal in the first half of 2020.

Vietnam has so far joined 16 FTAs, 11 of them have become effective, and most recently the Comprehensive and Progressive Agreement for Trans-Pacific Partnership (CPTPP), proving the country’s global integration policy, its important geo-political position on the regional and global arena, he said.

Lam said cooperative ties between the Vietnamese Ministry of Public Security and EU member states have been developing fruitfully and reaped important achievements in the fight against trans-national crime over the past years.

The minister affirmed that the Vietnamese Ministry of Public Security would continue working closely with the EU and EP in crime prevention and control, and cyber security.

Lange, for his part, said the EP and the Committee on International Trade in particular will continue expanding collaboration with the Vietnamese Ministry of Public Security in fields of shared concern./.