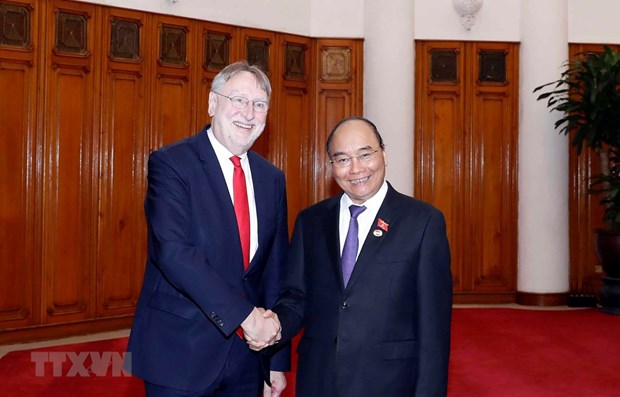 The PM thanked Lange for his efforts to push for the European Union’s signing of Vietnam – EU Free Trade Agreement (EVFTA) and the Vietnam – EU Investment Protection Agreement (IPA).

As both sides will celebrate the 30th anniversary of bilateral diplomatic ties next year, Vietnam and the EU need to increase the exchange of high-level visits, maintain dialogue and cooperation mechanisms, as well as promptly solve existing problems in bilateral ties, PM Phuc said.

The Vietnamese PM hailed the strategic economic significance of the EVFTA and IPA to Vietnam – EU ties as well as the promotion of open, transparent and rules-based economic connectivity.

He believed that the Vietnamese NA and the EP will approve the agreements at the earliest time possible.

The leader welcomed the EU’s interest in Asia-Pacific and its stance on supporting freedom, security and maritime safety in the East Sea, wishing that the EU would continue playing an active and constructive role in the region.

He also hoped that the EU – ASEAN ties, and Vietnam – EU ties within multilateral framework will continue to be strengthened, contributing to peace and prosperity in the region and the world.

Lange affirmed that the EU supports Vietnam’s stance on the East Sea issue, adding that with the signing of important agreements on trade and investment, the development of ties based on partnership instead of competition is extremely important in the context of a constantly changing world with numerous risks.

He said the EP will consider voting to ratify the two agreements in next February, and informed that in this visit, his delegation had met Vietnamese authorities to discuss the ratification and delivery of commitments in those deals.

The guest affirmed that the EU is ready to help Vietnam build and perfect policies in order to propel growth and improve people’s living conditions.

The EU wants to work closely with Vietnam at multilateral forums, especially in 2020 when Vietnam serves as ASEAN Chair and a non-permanent member of the UN Security Council for the 2020 – 2021 tenure, he said. /.