Hanoi (VNA) – The National Assembly acknowledged and highly appreciated the outcomes achieved in implementing the NA’s resolutions on socio-economic development and State budget in 2019 during a live-broadcast discussion on October 31, the 9th working day of the legislature’s 8th session. 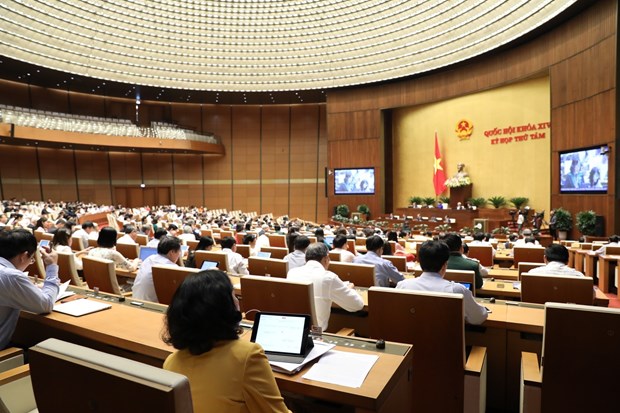 The 8th session of the National Assembly is underway in Hanoi (Photo: VNA)

The NA began the important discussion on socio-economic and State budget performance in 2019 and plans for 2020 on October 30. The discussion is being broadcast live on national television and radio and the NA’s TV channel.

Most opinions approved the Government’s reports on the matters and the NA Standing Committee’s verification reports, saying that the reports have created a comprehensive picture of the country’s socio-economic situation in 2019 and proposed solutions and tasks on socio-economic development in 2020.

The deputies, however, contributed their ideas with a view to further perfecting the reports, calling for more assessment of growth sustainability and quality and pointing out many outstanding problems in socio-economic infrastructure, education-training quality management, poverty reduction and new-style rural area building, development gap among regions, environmental pollution, along with the complicated developments in the East Sea, among others.

They also suggested solutions to promoting rapid, stable and sustainable socio-economic development in the time ahead.

On November 1, the NA is slated to consider the master plan on socio-economic development in ethnic minority, mountainous and especially disadvantaged regions in the morning. The sitting will be broadcast live on national TV and radio.

In the afternoon, the NA will look into a draft resolution on handling tax debts and fines on overdue debts of tax payers who have no longer been able to pay to the State budget, the deferment of payment of mining and water resource exploitation fees, and the use of 20 percent of the balance of the medical insurance fund in 2015./.