Hanoi (VNA) – Prime Minister Nguyen Xuan Phuc told a regular cabinet meeting in Hanoi on November 5 that positive results of the economy in October and the past 10 months create an important foundation for new production capacity and sustainable growth. 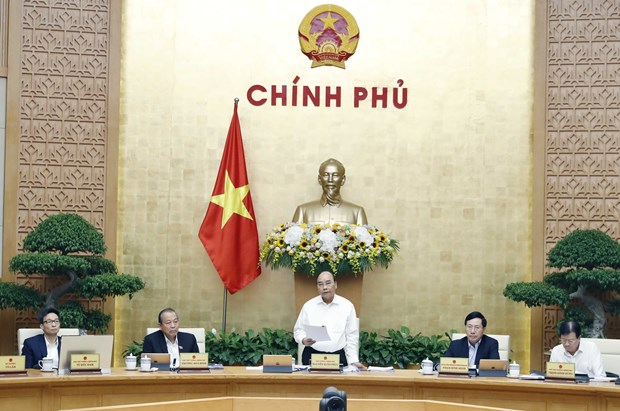 The Ministry of Planning and Investment reported that in October and the 10-month period, the macro economy stayed stable, while inflation was curbed at a low level.

The average consumer price index (CPI) in January-October expanded by 2.48 percent compared to the same period last year, showing the lowest growth for the 10-month period during the past three years.

The number of newly-established businesses in 10 months continued to rise with the average registered capital of 12.5 billion VND (538,182 USD) each.

In October, the country welcomed over 1.6 million international tourists. The number of foreign visitors rose 13 percent year-on-year in 10 months, the ministry reported.

Besides the achievements, the PM pointed out the slow improvement of business environment. He noted that in 2019, the country moved down one place to the 70th position in the World Bank’s Ease of Doing Business rankings.

He asked ministries, departments and localities to pay more attention to addressing this matter in the last two months of the year, while making better preparations to attract major investors and high-tech firms in the context of investment flows shifting due to global trade tensions.

Mentioned the Essex lorry incident which is drawing great public concern, PM Phuc extended his deep condolences to the bereaved families, and directed ministries, departments and localities to spare no effort in the citizen protection work.

The PM added that the Vietnamese delegation is cooperating with UK agencies to soon announce the victims’ identities after conducting all necessary procedures and ensure the best protection of Vietnamese citizens.

The PM described the incident as a lesson for ministries and localities in management and reminded them of the existence of rings sending workers abroad illegally.

He also informed the meeting about the successful participation of the Vietnamese high-level delegation in the recent 35th ASEAN Summit and Related Summits in Thailand.

Phuc said the Association of Southeast Asian Nations (ASEAN) reached high consensus on the regional situation, especially the East Sea, as well as the implementation of the 1982 United Nations Convention on the Law of the Sea (UNCLOS) and the maintenance of peace, security, safety, and freedom of aviation and navigation in the East Sea.

As Chair of ASEAN in 2020, Vietnam needs to make the best contributions to promoting the central role of ASEAN and increasing the bloc’s position in the region and beyond, he said./.