HCM City (VNA) – Ho Chi Minh City always treasures and makes all-out efforts to preserve and consolidate the fruitful relations with Cambodia and its localities in particular, a municipal official said on November 6. 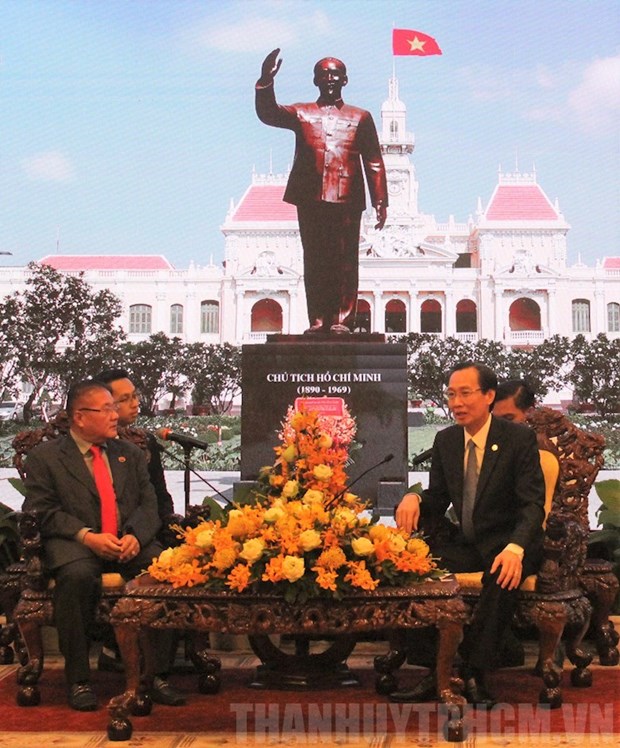 Le Thanh Liem (R), Permanent Vice Chairman of the People’s Committee of HCM City, and Ly Vann Hong, Special Envoy of the Royal Government of Cambodia and Secretary of State of the Cambodian Ministry of Information (Source: hcmcpv.org.vn)

Le Thanh Liem, Permanent Vice Chairman of the People’s Committee of the city made the remarks while receiving Ly Vann Hong, Special Envoy of the Royal Government of Cambodia and Secretary of State of the Cambodian Ministry of Information, who led a Cambodian delegation to the exchange of young journalists, youths and students in Vietnamese and Cambodian border provinces.

He highlighted the significance of the programme to promoting Vietnamese and Cambodian youths’ pioneer role as well as its contributions to preserving, consolidating and enhancing relationship between the two countries.

For his part, Ly Vann Hong thanked the close cooperation and effective support from the Vietnamese Government to Cambodia in information and communications, especially in building radio and television broadcasting stations in 19 Cambodian cities and provinces.

He called for more collaboration and assistance from Vietnam in this sphere in the time ahead.

Regarding the exchange programme, the Cambodian official said its diverse activities have demonstrated the resolve of both sides in boosting understanding, solidarity and friendship between their youths.

The event was held by the Vietnamese Ministry of Information and Communications and the Vietnam Youth Federation, in collaboration with the Cambodian Ministry of Education, Youth and Sports as part of the activities to celebrate the 52nd anniversary of the Vietnam-Cambodia diplomatic ties.

A wide range activities took place during the exchange, including a tree planting event, the inauguration of a children’s playground and trips to several tourist sites in Vietnam’s southwestern border province of Tay Ninh and HCM City./.