Hanoi (VNA) – President of the Republic of Korea (RoK) Moon Jae-in highlighted the good relations between the RoK and Vietnam in all fields while hosting delegates from the Organisation of Asia-Pacific News Agency (OANA) in Seoul on November 7.

Participants at the 17th General Assembly of OANA, which is taking place in Seoul on November 7-8. (Photo: VNA)

The delegates are leaders of news agencies in Asian-Pacific countries, including General Director of Vietnam News Agency Nguyen Duc Loi.

The President said Vietnam and the RoK have a lot of similarities, especially in culture, and expressed his hope that the Southeast Asian country will continue making contributions to the development of relations between the RoK and the Association of Southeast Asian Nations (ASEAN). 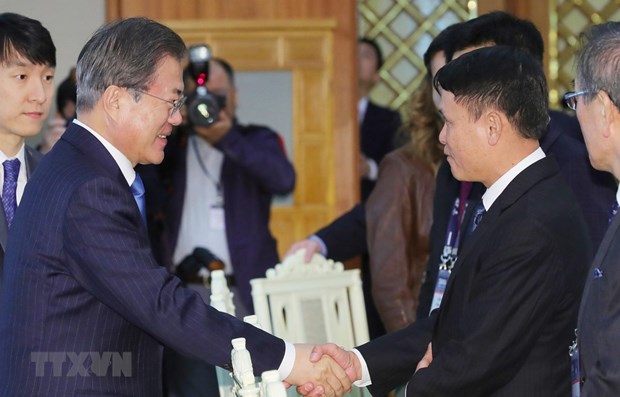 Speaking at the meeting, VNA General Director Loi mentioned the rapid development of Vietnam-RoK relations over the past 10 years since the two countries elevated their ties to the strategic partnership.

He said the visit to Vietnam by President Moon Jae-in in March 2018 created an important milestone in the two nations’ rapport, while expressing high hope for the prospect of bilateral ties.

The VNA leader went on to say that there are sufficient grounds to affirm that the bilateral relations will continue developing in all aspects, especially when the RoK defines Vietnam as an important partner in the New Southern Policy.

He said as part of the sound relations between Vietnam and the RoK, the VNA and the RoK’s Yonhap news agency have been actively joining efforts to promote the two countries’ relations through diverse information products on their media channels.

The reception for leaders of news agencies in Asia-Pacific took place on the sidelines of the 17th General Assembly of OANA which is taking place in Seoul on November 7-8.

The OANA was established in Bangkok, Thailand, on December 22, 1961 under the initiative of the United Nations Educational, Scientific and Cultural Organization (UNESCO) to strengthen and facilitate the popularisation and exchange of information between news agencies in Asia-Pacific, a dynamic region home to over 50 percent of the world’s population.

OANA now has 44 member news agency from 35 countries. The agencies are responsible for two-thirds of information circulated throughout the world. Everyday, they publish around 200 news stories, photos and video clips on the OANA website at http://www.oananews.org/.

Since joining the OANA in 1969, the VNA has proven itself as one of the active members of the organisation. The agency was elected to the OANA Executive Board for two consecutive terms, with each lasting for three years, from 2013 to present. The VNA hosted the OANA Executive Board Meetings in 1989, 1999, 2005 and 2019, actively contributing to completing the organisation’s targets./.