(VNA) – A programme was launched in the southernmost province of Ca Mau on August 1 to promote the Vietnamese naval force’s support for fishermen at sea. 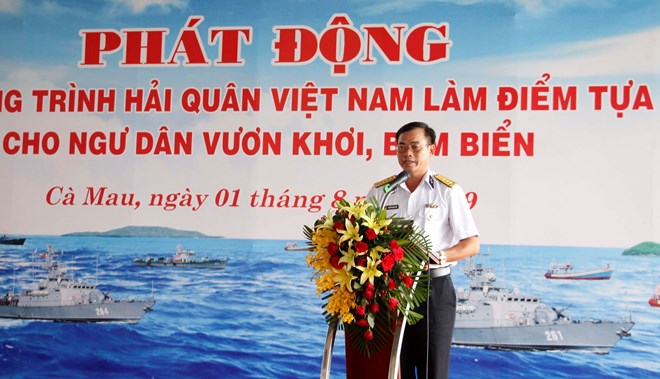 Col. Nguyen Dang Tien, Political Commissar of the High Command of the Naval Region 5, speaks at the launch of the programme in Ca Mau province on August 1 (Photo: VNA)

This programme aims to help the naval force improve communications and assistance for fishermen to ensure safe, sustainable and law-abiding fishing activities, which is also meant to help firmly safeguard the country’s maritime sovereignty and continental shelf.

At the launch in Song Doc township of Tran Van Thoi district, Col. Nguyen Dang Tien, Political Commissar of the High Command of the Naval Region 5, said the programme is one of the major policies of the Naval High Command to realise the Party’s resolutions and directives on sustainably developing the sea-based economy in tandem with managing and safeguarding national sovereignty of the sea and islands.

Under this progamme, naval units will boost communication activities to raise fishermen’s awareness of the importance of seas and islands, the maritime border demarcation between Vietnam and neighbouring countries, and Vietnam’s laws on seas, fishing activities and prevention of illegal fishing. They will also update fishermen on the situation of Vietnam’s waters, the sites providing fishery logistics services, and the naval force’s support activities for fishermen at sea.

Vice Chairman of the Ca Mau People’s Committee Than Duc Huong said sea-based activities are one of the important sectors of the local economy as the province has over 254km of coastline and a fishing ground of some 80,000 sq.km.

According to the official, the more than 5,000 fishing boats of Ca Mau catch about 200,000 tonnes of seafood each year, greatly contributing to its economy.

The province has taken numerous measures to improve the effectiveness of fishing activities at sea. However, problems remain, requiring joint efforts of the whole political system, the official added.