(VNA) – The northern mountainous region has recorded improvements under the national target programme on new-style rural area building, but it is still facing more difficulties and challenges than other regions. 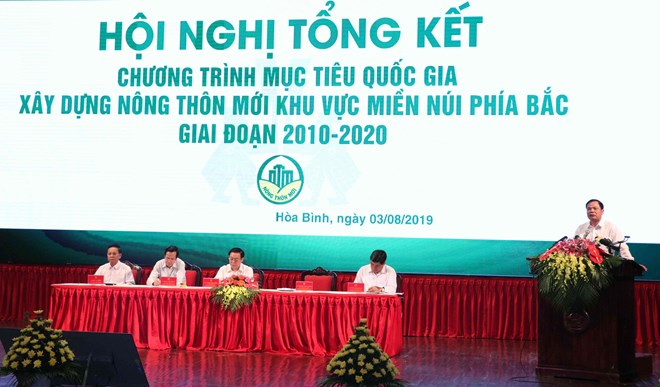 The assessment was made at a meeting held in Hoa Binh province on August 3 to review 10 years of the programme implementation in the region.

The national target programme, initiated by the Government in 2010, sets 19 criteria on different aspects, aiming to boost the development of rural regions of Vietnam. The number of criteria was increased to 20 in 2015.

At the meeting, Minister of Agriculture and Rural Development Nguyen Xuan Cuong, deputy head of the central steering committee for national target programmes for 2016-2020, noted the northern mountainous region comprises 14 provinces that account for 28.75 percent of Vietnam’s area and are home to over 30 ethnic groups.

The region is critically important to the whole country in terms of economy, society and security-defence, while holding potential and advantages in agriculture, forestry, hydropower, mineral, tourism and border gate economy.

However, he also noted this region’s complex terrain along with its underdeveloped infrastructure and socio-economic aspects, adding that after nine years of the new-style rural area building programme, the localities are still facing more difficulties and challenges compared to other regions.

Across the region, six district-level localities have obtained the new-style rural area status, becoming an encouragement to others in this work, he noted, commenting that this fact shows new-style countryside building efforts completely can gain widespread success even in disadvantaged areas, not only in several communes with more advantages.

The official also pointed out that despite improvements, there is a big gap in this work, especially in remote and border hamlets and villages, and the gap tends to become wider compared to other regions in Vietnam.

Meanwhile, fundamental infrastructure like transport, electricity and water facilities, along with schools and clinics, will be upgraded and inter-connected. The living standards of local rural residents will also have to be improved with the average per capita income rising by at least 1.8-fold from 2020, according to the committee.