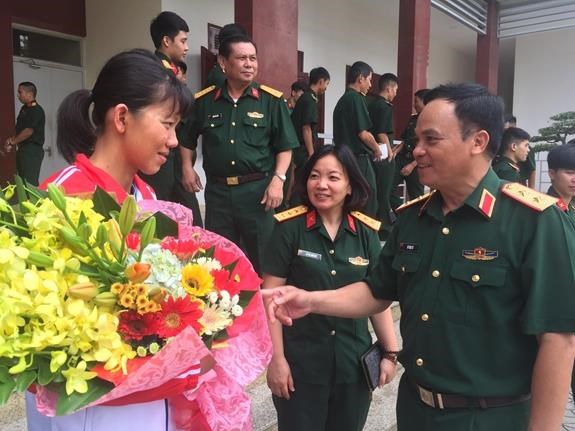 Lieutenant General Vu Van Sy, chief of the military training bureau under the General Staff of the Vietnam People’s Army, talks to an athlete at the meeting (Source: VNA)

At the event, Vietnam will compete in athletics, gymnastics, shooting, wrestling, boxing, tennis and swimming.

Speaking at a meeting with athletes before they left for the event on October 14, Lieutenant General Vu Van Sy, Chief of the military training bureau under the General Staff of the Vietnam People’s Army, said that the Central Military Commission, the Ministry of Defence, and the Ministry of Culture, Sports and Tourism always pay special attention to military sports movement.

He reminded athletes to abide by competition rules, strictly follow the management regulations of the Vietnam People’s Army, preserve the nation’s traditional cultural identities, and compete with a high determination.

The CISM is one of the largest multidisciplinary organisations in the world. The council organises various sporting events for the armed forces of its 138 member countries and territories.

It annually holds more than 20 Military World Championships for approximately 30 different sports, continental and regional competitions, the Military World Games and most recently, the Winter Games and World Cadet Games./.