Hanoi (VNA) – Vietnam secured the second victory at the World Cup 2022’s qualifiers after beating Indonesia 3-1 at Kapten I Wayan Dipta Stadium in Bali on October 15. 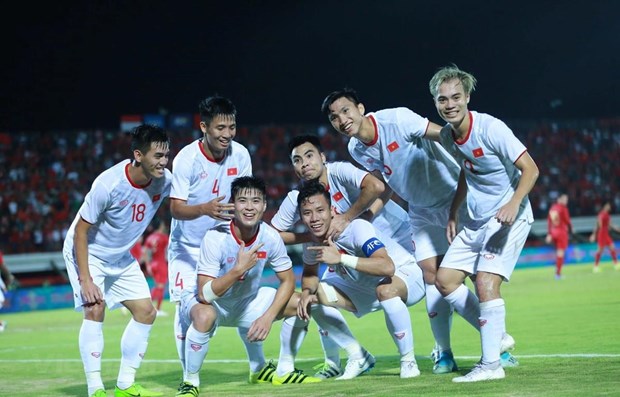 Vietnam opened the scoreboard in the 26th minute after Indonesia‘s clumsy clearance enabled an easy tap-in by Do Duy Manh.

At the 53rd minute, Do Hung Dung was slide-tackled in Indonesia’s box, earning a penalty for Vietnam.

Que Ngoc Hai did not miss this opportunity, scoring the second goal for Vietnam.

At the 57th minute, Nguyen Van Toan was presented with a chance to score, but an Indonesian player cleared it.

Not long later, at the 61st minute, Nguyen Tien Linh scored on a one-on-one after a pass from Nguyen Trong Hoang.

At the 72nd minute, Beto Goncalves’ shot nearly went into Dang Van Lam’s goal, but the keeper had the situation in control.

Twelve minutes later, Indonesia scored their first goal thanks to a shot that sailed past three Vietnamese defenders and goalkeeper.

The second half went on with five additional minutes.

At the 94th minute, Otavio Dutra fouled Nguyen Quang Hai in the area. But this time, Do Hung Dung failed to score one more goal for Vietnam.

Earlier, Vietnam had a victory at the World Cup 2022’s qualifiers in the match against Malaysia at the My Dinh National Stadium in Hanoi on October 10.

On September 5, Vietnam had a goalless match with Thailand in a frenetic match in the opener Group G in Thailand’s Pathum Thani province.

Vietnam are in the same group of World Cup qualifiers with regional rivals Thailand, Malaysia and Indonesia, as well as the favourites United Arab Emirates (UAE).

The 2022 FIFA World Cup’s second qualifying round for Asia features 40 teams, divided into eight groups of five teams, playing in the home-away format.

The eight group winners and four best runners-up will qualify for the third and final round of World Cup qualifiers./.