Hanoi (VNA) – The VPBank Hanoi Marathon has become an official international marathon tournament in the capital city, the organising board told a press conference in Hanoi on October 16. 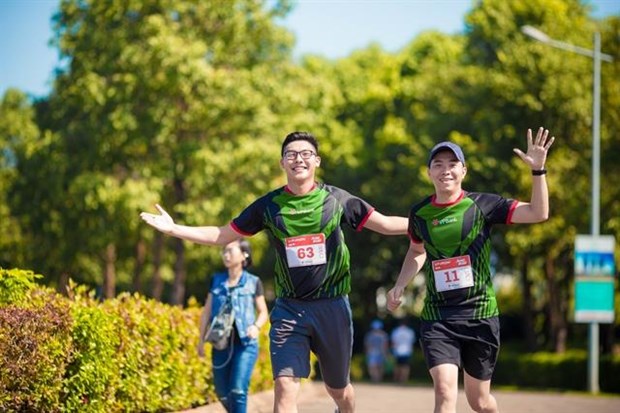 Illustrative image (Photo: VPBank)
The 42km race will start at 4:30am on October 20 in front of Ba Kieu temple near Hoan Kiem lake in the very heart of the city, with 5km, 10km, 21km and 42km categories.

The event will attract about 7,000 professional and amateur athletes, over 1,500 of them foreigners. They will run through major tourist landmarks such as Hoan Kiem lake and West Lake, Long Bien bridge, Hanoi Flag Tower, Temple of Literature, and Tran Quoc pagoda, which will popularise Hanoi’s tourism to foreign friends.

For each km or each photo at the VPBank Hanoi Marathon – Run & Share competition, VPBank will contribute 5,000 VND to one of the five charity funds chosen by participating athletes.

It is also one of the two official marathon tournaments by the Vietnam Athletics Federation.

Director of the municipal Department of Culture, Sports and Tourism To Van Dong expressed his hope that VPBank Hanoi Marathon will become an international cultural-sport event, contributing to the popularisation of Hanoi’s culture, tourism and food to the world./.