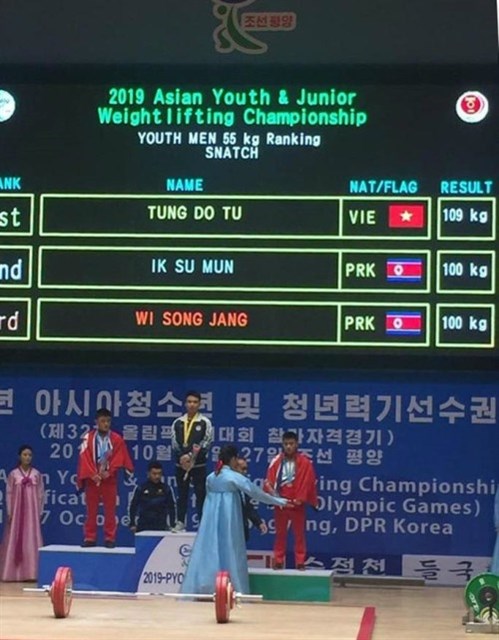 Four of the golds were obtained by Do Tu Tung. The 15-year-old competed in both youth and junior U55kg for boys.

His results in the snatch and total were tournament records. He was followed by two DPRK athletes.

His results were the same in the junior level where he was against athletes at the age of 18-19.

Then he topped the clean and jerk to secure his fourth title. He was second in total and third in snatch.

In March, Tung competed in the World Youth and Junior Championships and earned three golds in the U49kg in the US.

In the girl’s U45kg category for junior, Vietnamese Pham Dinh Thi won twice in the snatch (94kg) and total (165kg) and secured silver in the (71kg).

Her teammate Khong My Phuong won the clean and jerk with a lift of 75kg. She also scored a silver in the total (161kg) and a bronze in the snatch (86kg).

The Asian championship will be held until October 27 in Pyongyang. It has drawn athletes from 16 countries and territories.

Vietnam sent 22 representatives seeking slots at the Youth Olympics in 2020 in Switzerland./.