Meeting of GMS Southern Tourism Corridor opens in Can Tho

Can Tho (VNA) – Multilateral connectivity and cooperation in the formation of a high-quality tourist route was highlighted at the sixth Meeting of GMS Southern Tourism Corridor that took place in Vietnam’s Mekong Delta city of Can Tho on August 14. 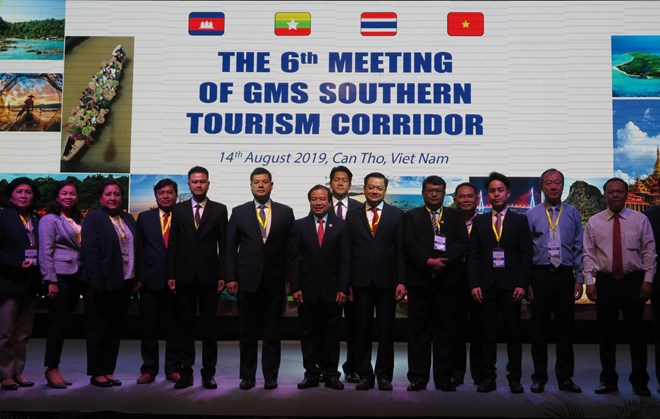 Delegates to the meeting (Photo: VNA)

The route is expected to offer interesting experiences to those using services jointly launched by Vietnam, Cambodia, Thailand and Myanmar.

Representatives from the four countries and the Mekong Tourism Coordinating Office (MTCO) sought measures to turn the transport corridor into the southern tourism corridor.

This is one of the 11 major tourist routes of GMS countries, he said, adding that since 2015, the above-said four nations have partnered in tourism product development and promotion and supported one another in improving tourism development capacity.

Thong Rathasak, Deputy Director General at the Cambodian Ministry of Tourism, said tourism cooperation between Cambodia and other countries in the southern tourism corridor has been expanded over the past time.

Cambodia is implementing tourism cooperation projects with Vietnam, he said, adding that national flag carriers of the two countries have signed a memorandum of understanding on collaboration in operation.

A representative of the MTCO stressed the significance of IT applications and social networks in tourism promotion amidst the Fourth Industrial Revolution.-VNA